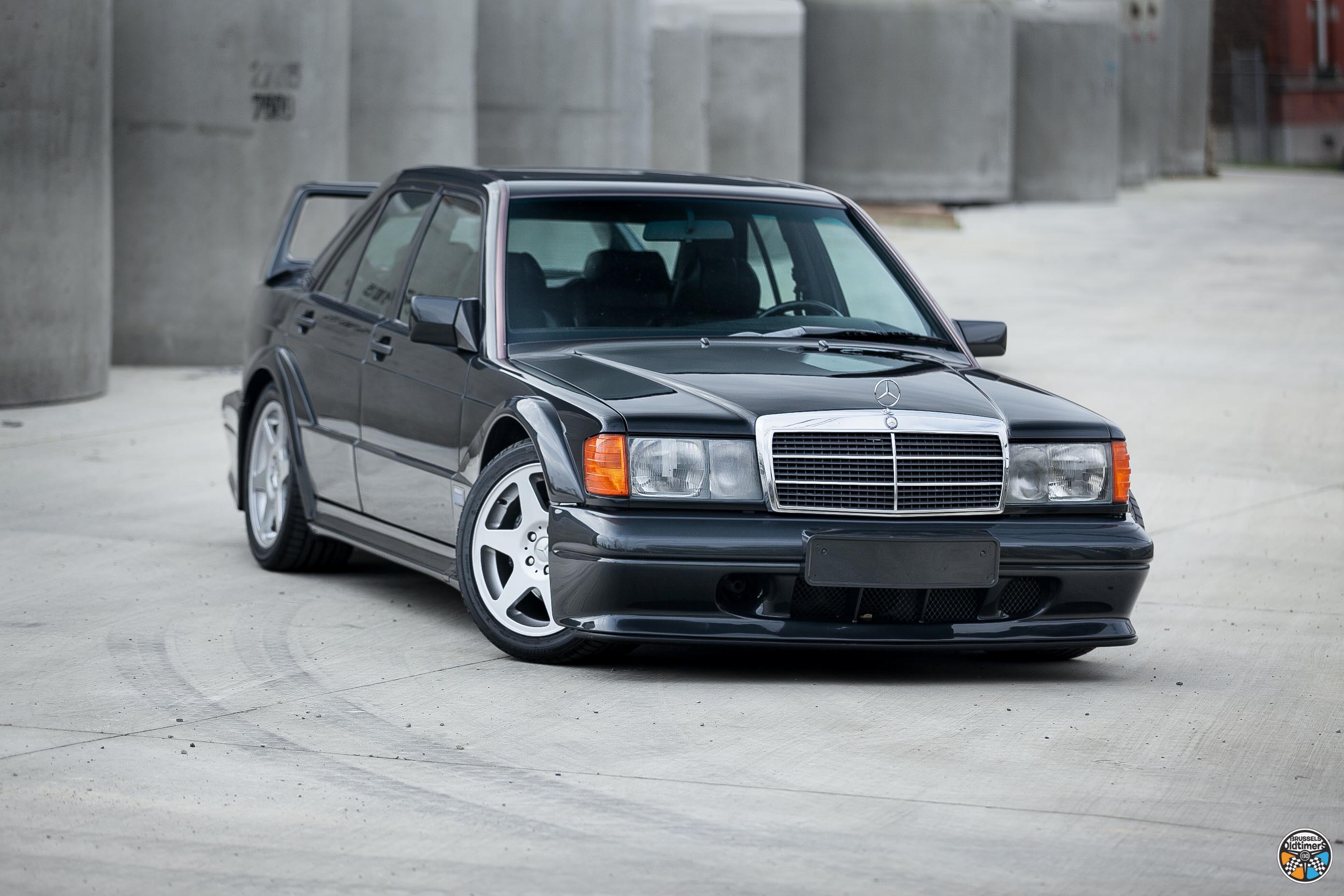 Once again, we have a beautiful day ahead of us. No rain, beautiful bright periods in the sky despite there are one or two threatening clouds and above all, a magnificent car right coming from a DTM race: the famous Mercedes 2.5-16 Evolution 2. Of course, it cannot go unnoticed! With its extremely aggressive look, it is a real head turner in the streets, that is for sure! Its spoiler is oversized and says a lot about the performances of the car. By seeing it, maybe some people will associate it with the movie Taxi where two grey Germans are chasing Sami Naceri’s taxi but you could not be more wrong. Here, we are talking about the 190 E 2.5 Evo 2 model, coming from the DTM races, and not about the 500 E appearing on the market a few months later. Both Mercedes in the movie are 500 E W124 with the V8 5L of the 500SL: two powered-up sedans with quite a mundane look. And here, we can assure you that it is not a common taxi but a real demoniac sports car and a lot of successive modifications on the basis of the Mercedes 190 E 2.3-16, which appeared in 1984. Let’s remember this nice time when motor sport certainly reached its peak regarding adrenaline. Mercedes brought out the 190 model which was used for the first time by the brand to participate to the German Championship of Supertourism. As you will have understood, we are talking about the legendary DTM. So, in 1984, the brand brought out its 190 2.3-16s civil model (engine elaborated by Cosworth), which, you probably already know, was a response to the brand BMW. This is to say that, whether on tracks or on the road, both brands compete for the “title”. Mercedes understood it pretty well, it must be able to compete with the M3 for group A and the 190 is the only model that can be potentially modified to compete with such a “bomb”. Some models have known a lot of evolutions during their career, it is the case of the Mercedes 190 16 valves which underwent two evolutions, both commercialized at more or less 500 copies to allow the brand to have access to the race with the new modifications. It is in 1989 that the first evolution of the 190 appeared, which, contrary to what its name makes one might think (190 2.5-16 evo) did not have the same “standard” engine. The engine of the evo is rebored and a lot of mechanical modifications were also made in order to make it even more “nippy”. Appearance too of this impressive large kit, which, for some people, looks like bad taste tuning but which is really useful technically for the stability of the car on tracks. Let’s go back to our fabulous 190 EVO 2, which was unveiled in Geneva in March 1990. Big surprise and above all, big evolution! Indeed, the second evolution of the 190 is simply outstanding, kit still that large, 17 ’’wheel rims, improved chassis, parts made lighter, lowering, and spoiler “f40” style. Concretely, it has what it takes to impress and can compete with the M3 from now on. Regarding the engine, it has more or less 80 hp less than the “race” version used for DTM, but the “civil” version, if we can still name it that way with its Darth Vader look, still has what it takes to keep you on the edge of your seat with its atmospheric engine developing 235 hp. On the inside, there is no big change compared to the previous model. Some positive aspects such as a really good finishing of the used materials and a top range equipment on the dashboard but, unfortunately, some less glamorous aspects such as the steering wheel too big for a so-called sports car or the seats that do not embrace  the passengers properly; bad holding! In short, the inside is a little bit simplistic for the second civil evolution of the 190. What a chance and what a pleasure for us to be able to get close to this little monster. This EVO 2 is magical, what better dream than owning a car worthy of a legendary race but officially recognized for the road? Once again, we had a great time with its owner, who has excellent taste for automobile. Its owner knows really well how to fondle it. The Evo 2 has just come out a total body restoration with a specialist who, we can say it, has got talent! The work is beyond reproach. Its owner said that he was not really comfortable during the operation because there were so many fragile elements to take to pieces in order to entirely repaint it. We move away from Brussels to find a little neutral setting which matches this beautiful car. And here we are on the road again; we stop to eat something with the owner. Who says Belgium, says French fries, obviously! So, we make the most of this little break to know more about the history of this wonderful German.