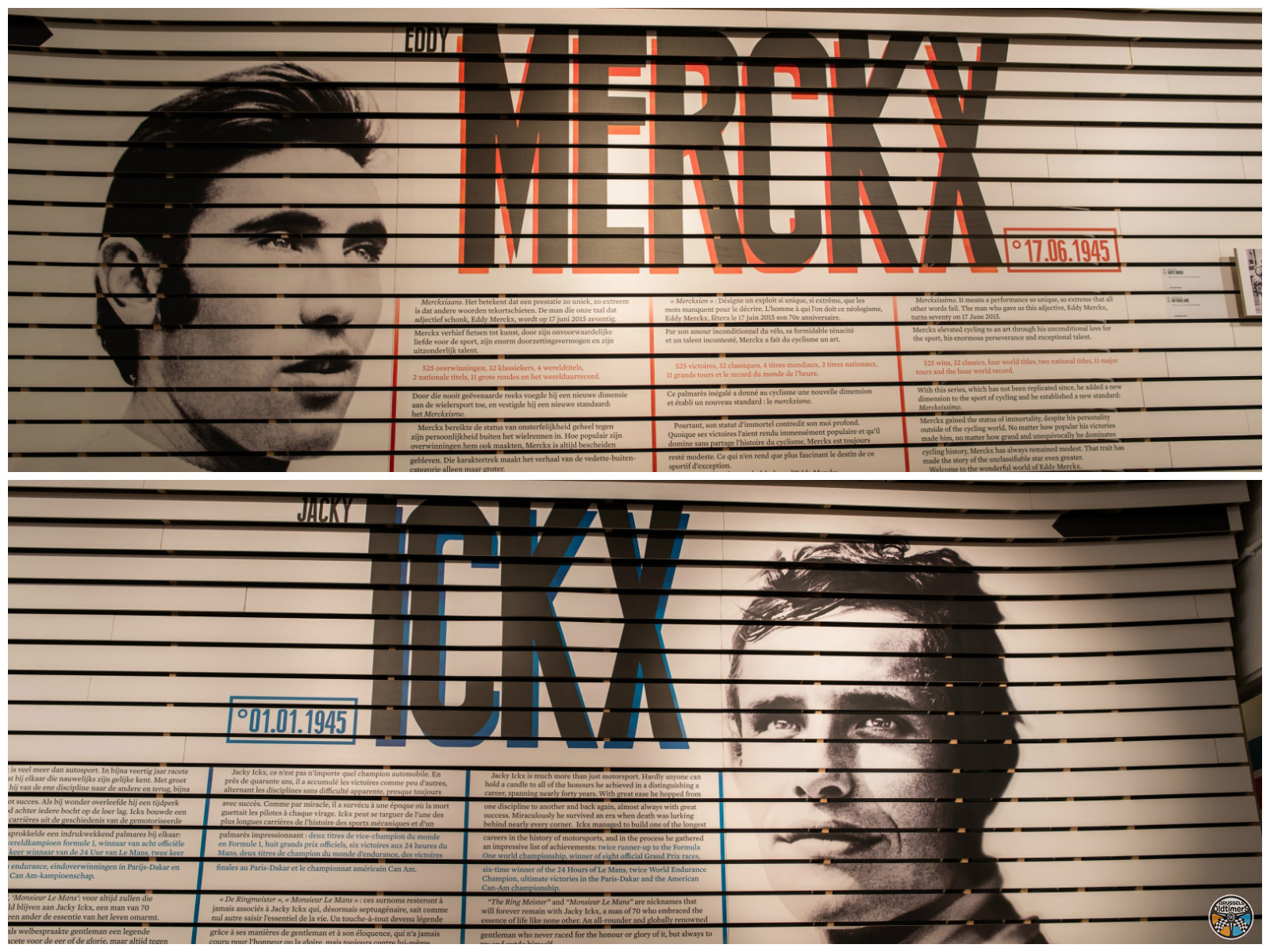 What’s there to do on a sunday when the weather isn’t on our side for taking our classics out or to work on them?

Go and see the exhibition about Eddy Merckx and Jacky Ickx !!!

The two biggest Belgian sports heroes celebrating their 70th birthday this year. To celebrate this, an exhibition as impressive as it is interesting is at Heysel until the end of June 2015. There are no valid excuses for not going ! Back to these two sportsmen.

Eddy Merckx extraordinary talent, nobody had it, neither before nor after him. With 525 wins, he is considered as one of the most talented cyclists of all time. Then there’s Jacky Ickx, with possibly the richest and longest career in motorsports. He too won many diverse trophies. « Merckxien »“Merckxien” : A totally unique happening, so extreme that words cannot describe it. The man behind this word : “Eddy” With his emerging love for bicycles, his incredible courage and unrivalled talent, “Merckx” turned cycling into an art. However his immortal status goes against his ideas. His victories made him incredibly popular and he dominated the history of cycling, Merckx always stayed very modest. That simply made him even more fascinating. The 27th of October 2000, the englishman Chris Boardman went 10 meters further on the Manchester ring, going 49.441km.
He achieved this result on a bike made in a factory in Meise : Boardman was riding an Eddy Merckx bike ! The 15th of July 1969, Eddy Merckx made the best performance of his career. In the last meters of the Col du Tourmalet, he broke away from his team mate Martin Van den Bossche and went solo for the last 140km on the Soulor and l’Aubisque Cols. Merckx made the rivals times look poor by any standards. At the finish line, he was 7 minutes and 56 seconds ahead of the second, Italian, Michele Dancelli ! In one stage, with four different cols, extreme climatic conditions, Eddy Merckx beat his rivals and outdid himself. The director of the Tour, Jacques Goddet, invented to talk about this phenomenon the word “merckxissimo” which means “with panache and authority”. Jacky Ickx is without doubt more than just a racing driver. In almost forty years of racing, his sporting achievements are still unequalled, going from one discipline to another with ease and always with great success. He miraculously survived an era where death was hiding around each bend.

Ickx built one of the longest motorsport careers in history, being two times Formula 1 vice-World Champion, six time winner of the 24hours of Le Mans, two times endurance World Champion, Paris Dakar winner and the American Can-Am championship. He was voted Sportsman of the year in his own country. Later he was voted driver of the century in endurance racing and an honoured citizen in the town of Le Mans.

It’s not without reason that he’s nicknamed “The Ring Meister” and “Monsieur Le Mans” These two nicknames will always be associated with Jacky Ickx. Jacky Ickx survived the most dangerous, “black” period of Racing. Every year he would bury a racing driver, a colleague, a friend. Jim Clark, Jo Schlepper, Lucien Bianchi, John Wolfe, Piers Courage, Bruce Mclaren, Jochen Rindt, Pedro Rodriguez, Joseph Siffert, François Cevert, are only a few of a never ending list.
Death is omnipresent; and even if Ickx saw it up close a few times, he always pulled through : In 1963 at La Roche-en-Ardenne, in 1969 driving home after his first win at Le Mans ; on the Spanish track Jarama in 1970 ; on the Kyalami in South Africa in 1973 ; on the American track of Watkins Glen in 1976 and in Egypt in 1991. “When I was closing the door of my home before a weekend of racing, I was wondering if I’d have the opportunity to open it again sunday evening. Later I realised that I owe a lot to my gardian angel, who looked over me for thirty years.” » Talent in every domain, “Jacky isn’t good at anything” This phrase that he often heard at school. He was out to prove the contrary. And what a way to do it ! No challenge frightened Ickx. It’s what meant that in the 60s, 70s and 80s he was one of the most useful drivers of the planet. Without difficulty and often with great success, he went from wheel to wheel, category to category. Two wheels, trial to pure speed. Four wheels, from Formula 3 to Formula 2 then Formula 1. Around the same era he was also well known in Hill Climbs, rally raid and endurancee championships. Jacky Ickx, an artist behind the wheel, he was lucky enough to never specialise in a certain domain and to benefit from a sporting calendar that made this possibly.

At one point he raced 48 weekends per year. “When I think about these crazy years, I wondered if it really was me ? I still haven’t realised that the man I am today is the same as the one that had disputed these intense races.” » Instead of simply telling you the stories of all the wins of Ickx, we’re going to go back to Ickx at the 24 hours of Le Mans in 1969, because whether it was his start or finish, he was a real hero !

At 14:00, the race starts. Stommelen was the quickest across the track and he used the Porsche 917’s power to slide away to his advantage. Some people were slower but the slowest was a young Belgian, 24 years old… Jacky Ickx. He walked across the track, pretended to look for his keys, finally got into his car, took his time to put on his harness, closed the door, started the engine and finally started in last position… The Belgian’s Ford, the n°6 GT40, the same car that won the 24 hour race the previous year, he’d only got to the first corner when the loud speakers announced the position of the first cars on the Hunaudières straight.

Ickx’s main motivation was to protest against the classic “Le Mans” start which meant that a minute later you’re at 350kph without being properly strapped in.
“It’s impossible at such speed to strap in correctly”
Maybe we can use Jacky Ickx’s words to explain the mortel accident of John Woolfe on the first lap ? Nobody will know. The Porsche 917 n°12 of Vic Elford and Richard Attwood lead for the first 18hours but his abandon made for an unprecedented duel. Porsche is the favorite, it’s no longer a doubt but what’s the Ford n°6 doing ? The more time goes past, the closer it is to the front. Starting dead last, it’s making it’s way up the field. After 20 hours, the n°6 Ford took first place.
Hermann and Larrousse’s n°64 Porsche 908 caught up to the GT40 and in the third last hours, they fought hard. Both teams were keeping an eye on each other, were analysing each other, testing each other at numerous occasions. The last driver swap, Herrmann replaced Larrousse in the Porsche, Ickx wanted to finish the race, he’s ready to fight till the end, he knows the Porsche by heart, it’s advantages and flaws. In the last laps, Ickx is last behind Herrmann exiting Tertre Rouge, he slipstreamed and overtook the Porsche at Mulsanne. He’s won, on the last part of the track the Porsche cannot overtake. However Jacky didn’t realise that it wasn’t 14:00, he must complete another lap. Herrmann won’t be taken again. Going out of Tertre Rouge, the Ford slipstreamed the Porsche which puts the GT40 in a delicate position. At the middle of the Hunaudières, Jacky let off the power for a moment, Herrmann thought he was in difficulty without thinking about the Belgian’s trick. Jacky tailgated the Porsche, and down the Mulsanne straight. It’s 14:00, the 24 hours of Le Mans are finished, and the first that would cross the line would win. Jacky has no room for mistake, he kept up an awesome rhythm. He was looking more in his mirrors than in front of him but he must stay ahead. Crossing the line he was 120 metres in front of the Porsche after covering 4997.880km… Incredible. Jacky Ickx, who started last, won the 1969 24 hours of Le Mans. He later explained the last lap : “Herrmann saw that we couldn’t separate, neither me nor him. For me these last two hours were quite simply an audition for the last two laps. To know at what point I could overtake to be sure that he wouldn’t get back past. Also in case I didn’t get to Mulsanne first I had another solution. Exiting Maison Blanche I tried twice to get him to run wide, it worked perfectly I then started the straight line in front. in fifth gear, light throttle. He didn’t want to overtake because he knew that whoever was first at the beginning of the straight was seen, done and corrected. We did the first third in slow motion. Then everything went wild, he tried to take me. Very quickly I dropped back into forth and stuck to his tail. In the first third I overtook him and he couldn’t get back past”.”. Jacky Ickx and his team mate Jackie Oliver, even without the boss of Ford, managed to adopt the perfect tactics, being careful with the car as if it were themselves, and this isn’t even part of merit that these 24 year olds managed. Their natural exuberance. This was the first of 6 victories of Ickx at the 24 hours of Le Mans. He was the record man during 22 years before being beaten by Tom Kristensen in 2005.
The following year, at the 38th edition of Le Mans, they decided to end the “Le Mans” style start.
[recent_posts type=”post” count=”4″ orientation=”horizontal” category=”museum”]