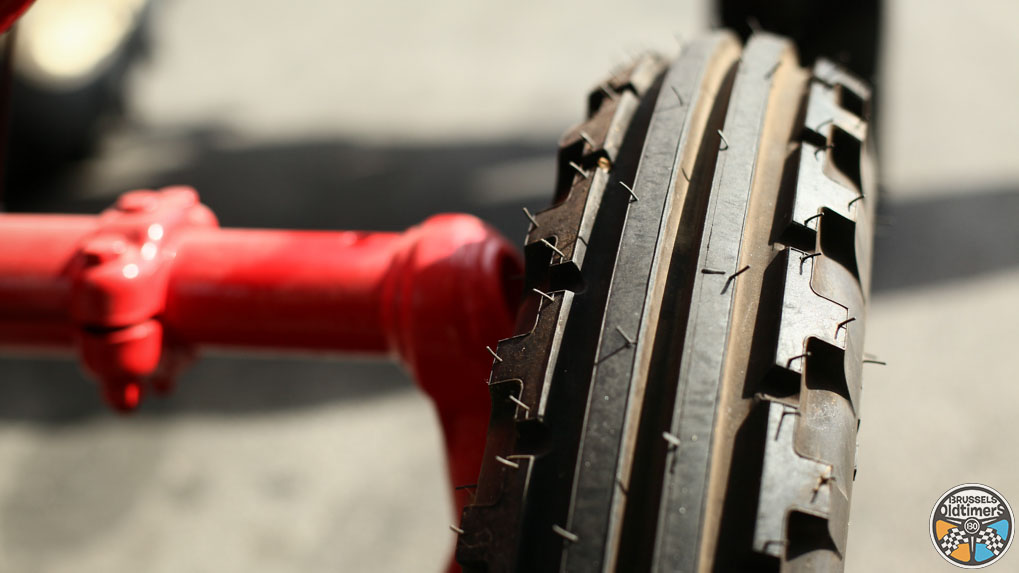 In 1937, the professor Ferdinand Porsche got a contract from Adolf Hitler to build a people’s tractor (Volksschlepper), an identical contract to that of Volkswagen, (the people’s car). From that day the engineers at Porsche set about this new project in their offices.

From their studies, in 1938 a prototype resembling a tractor is born, powered by an aircooled bicylinder in V, developing 12bhp, type 110. The following model, type 111 was powered by the same engine, but with a 3 speed gearbox.

It’s particularity is it’s twin clutch, the first a simple dry clutch and the second hydraulic.

In autumn 1944, Porsche moved from Stuttgart to Gmünd (Austria).

After the war, Erwin Allgaier, agricultural tool company and steel manufacturer, from Uhingen in Souabe (Bade-Wurtemberg), was interested in the people’s tractor project.

It was after a second agreement between Allgaier and Porsche in 1949, that the type 313 for Porsche and the AP 17 for Allgaier rolled out of the factories, with 18bhp.

After a financial study, and a market study, they decided to abandon manufacturing of tractors and went about steel manufacturing in the Uhingen factory.

From 1949 to 1955, 30 000 Porsche tractors rolled out of the Allgaier, Uhingen and Friedrichshafen factories.

The new company, founded the 1st of January 1956, named Porsche-Diesel-Motorenbau-BmbH [(Motorenbau = construction de moteurs) (GmbH=S.A.R.L.)] based in Friedrichshafen, was an affiliate of Mannesmann AG (AG=S.A.).

The Porsche KG, (KG = Limited Partnership) in Stuttgart, had taken control of a part of the manufacturing and development.

Throughout the year, many different modifications were made, such as the P logo for Porsche instead of A for Allgaier, (P 111, P 122, P 133, P144), Allgaier being replaced by Porsche-Diesel, and the crest with Allgaier-Diesel being replaced by Diesel on the bonnet. The AP 18 replaced the AP 16 that just like it’s predecessor, does not have a hydraulic clutch.

In 1957, 16 000m² of workspace was built, with the very latest manufacturing technology, Porsche-Diesel could build 20 000 tractors per year.

With around 11 000 tractors registered, according to the statistics, Porsche-Diesel went from 6th to 2nd biggest German manufacturer in 1958.

This is a Junior, type 108, powered by a single cylinder with 14bhp, with a 5 speed ZF gearbox.

Late 1958, Porsche-Diesel was aiming to considerably reduce prices of their tractors to make them more widely available. To make this possible, they released two simple tractors under the name Junior V that cost no more than 4980 DM and the Standard V that only cost 7800 DM.

A special series of 150 Junior 4, type 108-4s were built, the particularity of this series was that it had a reversible motor.

Roughly 120 000 tractors were built by this famous manufacturer, which knew better than anybody how to put their technological innovations into their products.

Unlike many other agricultural manufacturers that have long disappeared, Porsche is still going strong all over the globe, however, with their prestige sports cars.