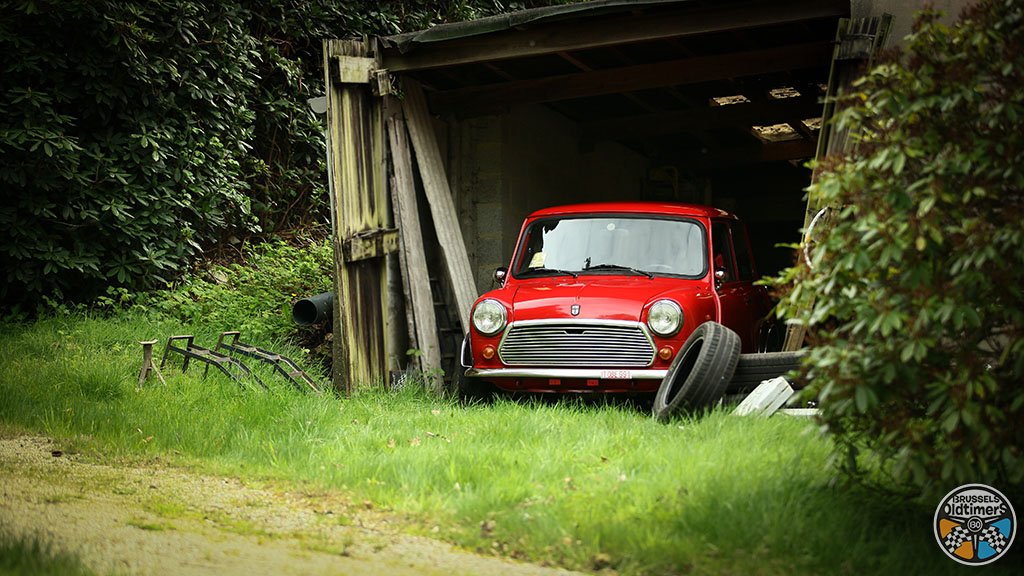 Loic is the proof owner of this beautiful Mini. He is here to tell us it’s story.
He’s always been into Minis, it’s a car that marked a generation, an icon of the 60’s, a revolution back in the day, ( traverse engine, welds on the outside to maximise space inside etc… Timeless!

What Loic loves with British cars, are the curvaceous lines, but also manly touches. The finish, especially inside is often far from good, but to drive they’re a joy! He adds that driving a Mini provides great sensations, “ It really feels like a classic car in every aspect… pure driving pleasure”. Each British classic has it’s particularities, the Mini is a real go-kart that corners flat with a little engine that has infinite tuning possibilities.

This is his second Mini, the first was a 1977 British Leyland 1000 automatic (mk3) that he’d bought aiming to build a race inspired car. The bodywork was almost in concours condition and the car was 100% original, a real gem, but for financial reasons, Loic had to sell it… BUT, not to anybody? To his brother !! Another British car enthusiast.

Loic had been looking to change Mini’s for a while, he wanted a 1275 with nice bodywork, without rust. After a few months searching and some dissapointing viewings. He found this one from 1983 with a 1275 under the bonnet. Very solid but needing some TLC. After buffing up the paint, new rims (period correct of course) and a few accessories, it already looked a lot better. It’s now Loic’s daily driver in Brussels.

A Mini is always fun to drive, if it’s in town weaving through trafic and narrow streets, or on country roads where you can floor it for corner to corner, or event directly take it to the track where they’re perfectly at home once race prepped. It’s not needed to say that this lovely looking Mini turns heads, putting smiles on faces and also guaranteeing success with the feminine gender. It’s always a pleasure to take it out, people love seeing a classic Mini in such nice condition.

The Mini is originally a 1000 jet black edition, totally stock with 32000km, the previous owner bought a crashed Mini 1300 that had 50000km on the clock and fitted the 1300 engine and drivetrain in the 1000. It looks 100% stock. The car has only had 1 previous owner! It was repainted in 2001 ( when they changed the engine ) in it’s original colour (flame red). He only used to drive it 3 times a year and sold it for that very reason. A young British car enthusiast.