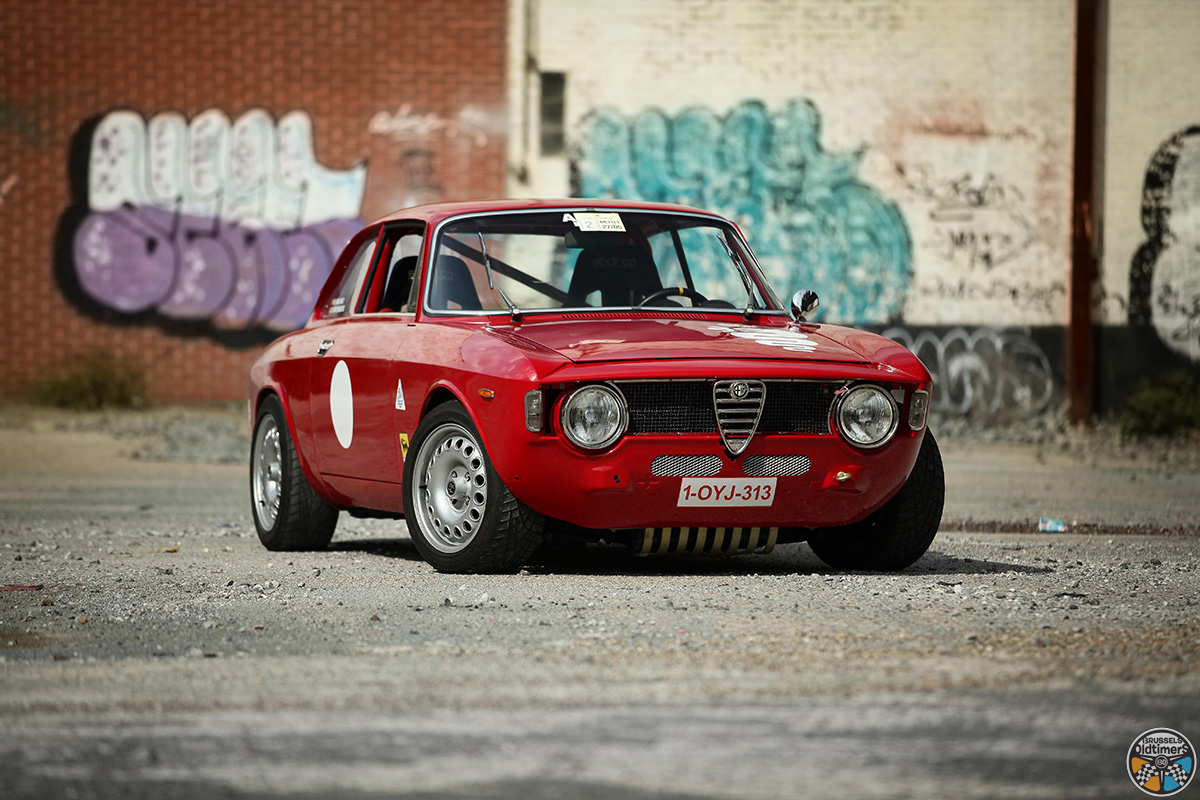 It’s hard to not to fall under the charm of the Alfa Romeo Giulia Gt Junior, and this one has everything to seduce you to the point of wanting to get hold of one as soon as possible… We came across this one at a gathering in the outskirts of Brussels, and it didn’t fail to impress us. After taking with the owner, charging up my camera, emptying the memory card, we set off to check out this little Italian sportscar more closely. The Alfa Romeo Giulia Junior came out in 1966, it was built for 5 years until 1971. In 1972 it lost it’s name “Giulia” and the front end was totally redesigned. The car still stayed in production in the new Arèse factory until 1976.
Direct replacement for the legendary Giulietta Sprint, aimed at a younger clientele, it’s sporty looks made it a real head turner. The first series, made from 1966 to 1969 was very badly equipped compared to the Sprint Gt (same bodywork but a 1600cc engine) but along came the second series, well equipped with a new dashboard, hydraulic clutch, brake regulator and a rear anti-roll bar. The first Gt Junior’s were called Scalino, or “letterbox” because of the shape of the bonnet, the design of the from will be flattened later on when it was facelifted in 1972. It was considered as a real sportscar back in the day, with it’s legendary double overhead cam engine. The 5 speed gearbox helped to hide the lack of power compared to it’s rivals. With four disk brakes and it’s light weight (930kg), it had very good braking and had no trouble keeping up with the other sportscars of the era, like the BMW 2002. The version featured here has been lightly tuned for race use, many parts from more modern versions have been fitted to perfect the handling and overall performance, but still with Alfa Romeo parts.

The engine is the standard 1300cc, rebored to 2l, fitted with a header and complete stainless exhaust, just imagine the noise… It’s just like listening to music, absolutely beautiful, just like the Italians are good at!
The engine bay has been simplified, for a very clean look, the air filter has been removed and 4 pipes like the legendary Gta are present. The interior has been completely stripped out and fitted with a roll cage, bucket seats, racing harnesses, and a more recent dashboard that looks much sportier with 2 dials aimed at the driver. When you’re sitting behind the wheel it feels just like a period racing car. To finish it off, servo brakes were fitted, the Junior not having them as standard unlike the Gt Sprint. The fuel tank has been replaced by a 55l aluminium model fitted between the rear dampers for better weight distribution and for security reasons. This also allows the spare wheel to be kept in place. On the outside, the bumpers have been removed like on racing cars, the stock grills have been replaced by the Gta ones, and 15inch rims have replaced the original steel wheels. Fitted with Toyo R1R tyres, that are ok for road use, while also being perfect for the track. Also when you look at the front, you cannot miss the big sump guard, very useful on this sort of car. Unfortunately, Matrin, the owner, has decided to part ways with his pride and joy to start another project, if you are interested you can contact him by phone : +32 472 90 26 30