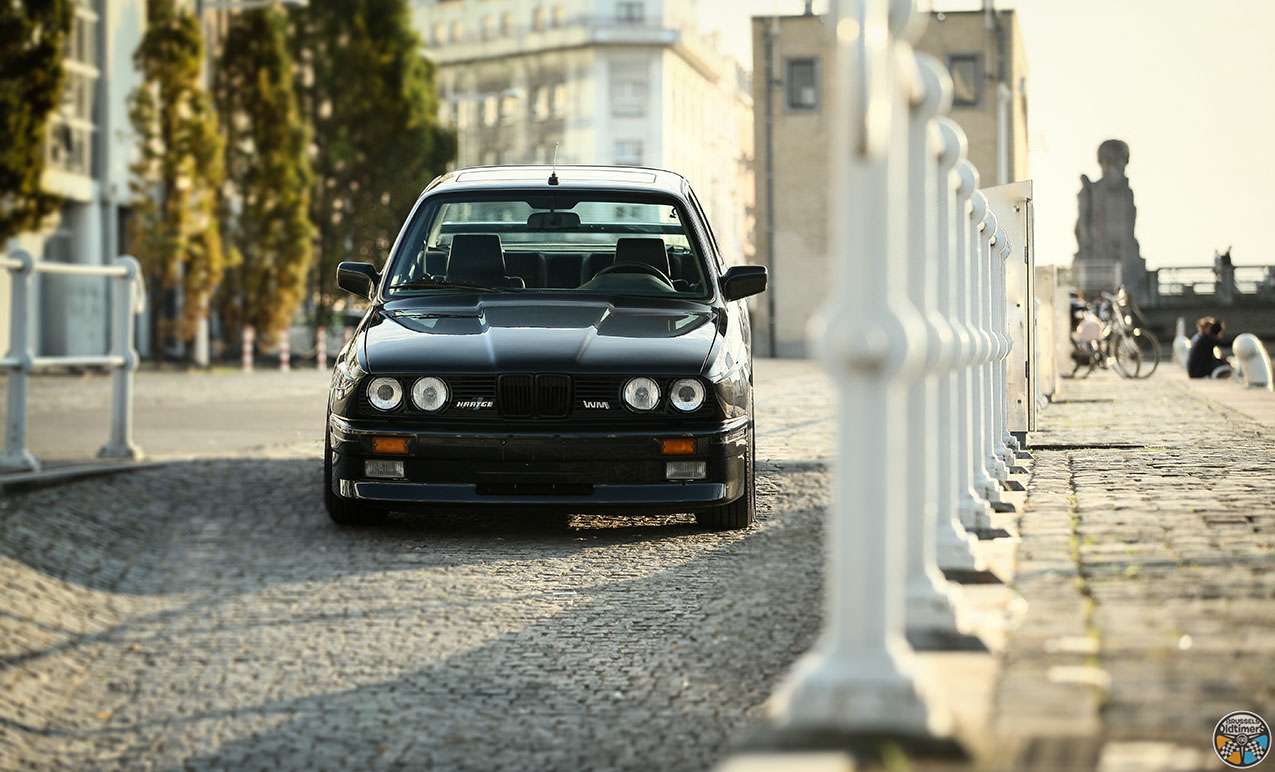 Since the world of classic cars is full of great encounter’s, thanks to word of mouth I heard of a M3 Hartge here in Belgium, near brussels. To start with, I didn’t really believe it, I was expecting a BMW E30 with various Hartge parts fitted like we’re used to seeing. A few phone calls later and a few e-mails, we planned to meet up at the docks of our good old capital city.

Incredible! It was really true : a Belgian Hartge! Here’s a quick introduction to the H35-24 Vitamine H

According to Bavarian historians, only 6 of the model H35-24 on the E30 M3 chassis were built… After contacting Hartge many times, even speaking to Herbert Hartge himself, nothing can actually be confirmed, because back in the day these projects were one offs, built by enthusiastic engineers aiming to build cars and push them to their limits.

The low production numbers are mainly because of the time involved building one, which made them very expensive. Don’t forget that the base car is a brand new E30 M3, already an expensive car, which in this case is totally modified and tuned to achieve amazing performance. This H35-24 was sold new in Belgium, by the garage Waterloo Motors ( badge on the grill that replaces the M3 badge, on the Hartge model there was no M3 badging) who was the official Hartge dealer, and who also had a touring car championship team with E30 M3s with Eric Van de Poele, Jean Michel Martin and Didier Theys. Who won the 24H of SPA in 1987. You can see the nice WM logo on the grill that is a nice reference to the racing team.

When it was first tested, it was driven by Eric Van de Poele who was comparing it to the M3 that they used on the track, with a heavier engine up front, to check out the performance. This car was bought in 1988 by the boss of Century Oils, a company specialising in oil for high performance engines. As a semi-professional racing driver, he fell in love with this Bavarian beast. Used nearly every day and travelling 86 000km until 1998.
At this point the car was stored in a garage in Braine l’Alleud because the owner wanted to move and couldn’t take the car with him, but no way was he going to sell it! Unfortunately he died shortly after storing it. After staying in this garage for 13years, in 2011 his wife accepted to sell it to her husband’s younger cousin, instead of Hartge who were showing interest in the car for their museum. By luck the car is still in the same family.

After 13 years without running, there was a lot to do to get the car up to scratch. This took over 3 years to get it perfect. This wasn’t an easy job, because over 20 years later, it was very difficult to achieve it’s original power. After an oil change, changing the air flow metre, checking the valves, changing the dirty injection, restoring the two fuel tanks, all the fuel lines and many other little details. It was running again, but was only showing 270bhp on the dyno… No other choice but to phone up Hartge themselves, through the sales manager of Waterloo Motors. Them being the dealer who sold the car in 1988, (in fact also a cousin of the old and new owner) he still had Mr Herbert Hartge’s number on record. The 80s tuning company unfortunately no longer work on classic vehicles. They only deal with electronic remaps and accessories. Then along came a miracle, with a lot of luck, they were put in contact with the German, Manhart who worked with Hartge back in the day and was the person who built this H35-24.
Knowing the vehicle by heart, it was a pleasure for him to revive the car’s original 330bhp. You will have noticed that there are no BMW badges whatsoever on this car, inside and out. Only the monstrous straight 6 has the Bayerische Motoren Werke logo. The engine used in this car is a M88/3 with 286bhp as standard. It was fitted in the E28 M5 and the BMW M635csi. Here it has been tuned by Hartge to 330bhp and 366Nm of torque, you better hold on!

This engine is closely related to that of the BMW M1, the M88/1 which developed 272bhp. Under the bonnet, the engine takes up a lot of space, many other parts have had to be moved, the ABS is fitted behind the passenger headlight and makes changing a bulb impossible unless you have tiny hands! The windscreen washer reservoir has been moved into the boot. What isn’t going to please diehard BMW fans, is that the radiator to cool this pretty M3 is from a Mercedes. Herbert Hartge, being the brother of Rolf and Andreas Hartge who founded Carlsson, renowned for their tuned Mercedes, he therefore went to them to solve this problem. The brakes are from the M5 E28 and M635csi to improve over stock. The exhaust is custom made.
There are 2 anti sway bars, one under the bonnet and one in the boot. Behind this one, under bespoke carpet there is a secondary aluminium fuel tank which increases total capacity to 120 litres. Enough to be welcomed with open arms at the local service station. I’ll let you imagine the sound of this Hartge M3, we were lucky enough to here it setting off and there’s just one word : Wow! It’s a car that you must know to tame, not a car to leave in anybody’s hands

We’d like to thank very much the owner to have met up with us, with a lovely sunset too.

See you soon! Probably at the next 130 Meeting