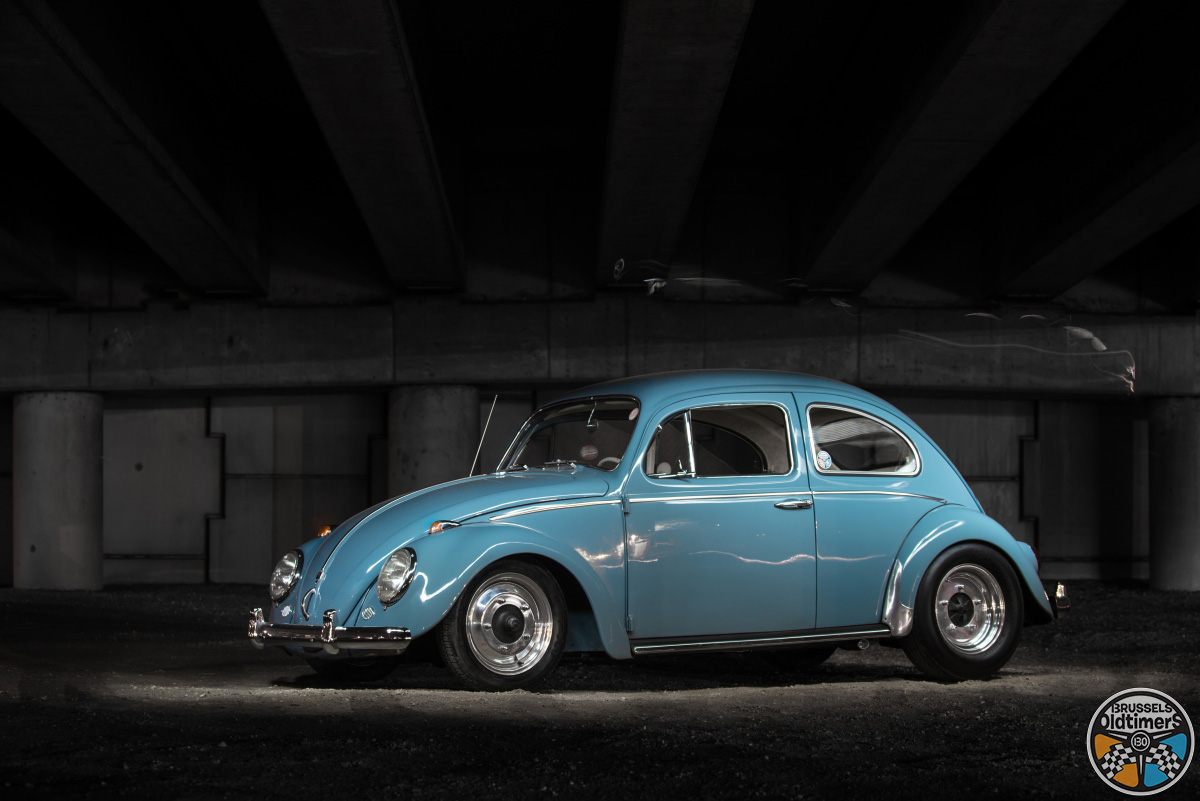 Christophe, the lucky owner of this gem explained that he never was a big fan of the beetle, or even Volkswagen for that matter.
To start off with he was just looking for a nice classic to restore, preferably a model that he would be able to easily find original and reproduction parts.

One day, a colleague turned up to work in a 63 beetle he had just purchased. From that day Christophe is in love with that model made up of simple curves and the simple concept. Attracted by the sound of the little 1200, he planned on owning one in the near future. After two years of searching and after attending many Volkswagen shows he finally found this rare gem!

His beetle comes from BBT in Antwerp ( Specialised in importing Volkswagens ), originally from Sweden and manufactured in 1962 ( delivered the 26th of july 1962 to the Swedish dealership ) , there he his, in love with this beetle, however he has very little information about the car’s history, though he does know that it was registered in 1991 by a classic car enthusiast in Sweden.

The car in itself, Christophe is very pleased to have found one in this colour. When he bought it the car was totally stock, with cloth seats and a locking steering column, the rest is a pretty normal beetle… Normal you say? That’s when Christophe comes into the story… Full restoration from A to Z by himself and some performance improvements to the car.

Concerning the engine, the standard sound of the 1200 has been replaced by a more manly roar. A beetle can have a rather much larger engine, and Christophe didn’t hesitate to fit a 2.3l, one of the biggest possible to fit in a beetle. This lust for power came along when he met up with the Der Autobahn Scrapers club that he now sees regularly. They have a common theme for their cars, “Cal Look”

After travelling and meeting a few members of the famous DKP club of California, he came back full of ideas and new projects. He then started gathering information to build his own 2.3l. Luck was on his side, only a few weeks after he got back from the US. A friend contacted him and offered to sell him his engine, his brakes, his gearbox and as a bonus, his magnificent Erco rims. With no hesitation, Christophe headed to the bank, emptied his account and there you go, he is the happy owner of a 2.3 litre engine. It only took him a couple of weeks to fit everything into his beetle !

How to describe the sensations of this tuned beetle ? It’s simple : Mind blowing ! Even knowing there’s 200bhp under the accelerator pedal, you’ll still be surprised at every acceleration, says Christophe.

Most people praise his car, which is even more pleasing for him as it’s all his own work. The funniest being people’s reaction at the red light when the beetle leaves them standing, not many people expect the beetle to be so powerful. The car looks normal, however in reality…

The peaceful beetle has never been renowned for performance, apart from at the Cinema?