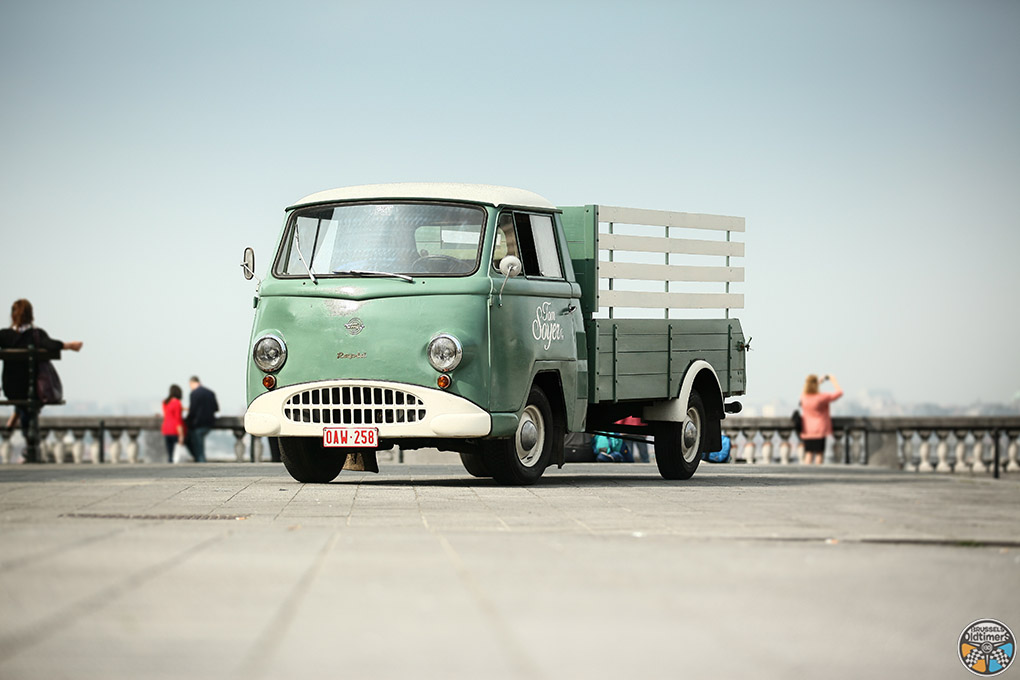 It’s with great pleasure that I present you this little tempo with it’s incredible looks, if you ever see it in the streets of Brussels, you’ll understand why I took time to check it out. It has an amazingly friendly look, with the front end looking like some kind of cartoon character. The name Tempo Rapid is well chosen too, as it is more powerful than it’s predecessors. Which had a great effect on sales compared to the Tempo Viking with it’s 452cc engine, this one being 948cc. A little 60s van, out in a field, how couldn’t I fall in love with it, explained the owner. It was full of tyres and moss, after spending 5 or 6 years sitting in the grass, this was a bit of a challenge to get back on the road.

Little but spacious cockpit, that is also robust, simple mechanicals and well thought out, this is what it had going for it. Previously used at an airport somewhere in a German village, then owned by a couple of florists in Belgium, near Liège for a few years. It’s the great team from Racing Box, real enthusiasts who got hold of this pick up that looks like a livestock transporter. German designed, fitted with a BMC 948cc engine from an Austin increased performance compared to previous models like the Viking.

The launch of the famous Volkswagen Type 2 shortly followed after then end of production of Tempos. Tom told us that he simply wanted to get it back on the road quickly, he just had to save it, a bit of work later, basic maintenance, after sorting out the brakes and the bodywork and it’s looking good, Tom is an artist, with a few pots of paint, he rolled up his sleeves and set about painting it himself to keep it looking period, using original colours. He also had the idea to use the Tempo as a promotional vehicle for his work, what a great choice, it suits it perfectly! A little anecdote Tom told us, when aiming to start up an old engine, we needed a battery, the only problem was that Tom forgot one little thing, the Tempo is 6 volts, so you can imagine the mess when trying it with a 12V battery. No problem, Tom got on with it and redid a big part of the wiring loom that had melted and the Tempo started up and runs like a swiss clock. The weeks went by and the Tempo was coming along slowly but surely, the gearbox has been rebuilt, just like the mini engine, oil leaks out of it pretty freely so the oil must be checked frequently, but the Tempo is running, and very well, so well that Tom uses it almost on a daily basis around the little streets of Brussels. This little truck was available in different versions, Combi, Pick-up or even personalised as the client wanted, 21 481 were made. If you ever get the chance to see one, make sure to get a photo, as you’re unlikely to see another, apart from this one with Tom on board. “This Tempo is full of charm and sweetness, it’s little horn is comical.
I know it very well now, it almost makes me forget my classic BMWs… I say almost…
Thanks to Racing Box, and to the Brussels Old-timers and I’d also like to say a quick hello to all enthusiasts, young or old.”
Tom

If you have a project in mind, or would like a canvas of your classic car painted by hand : www.tomsoyer.be