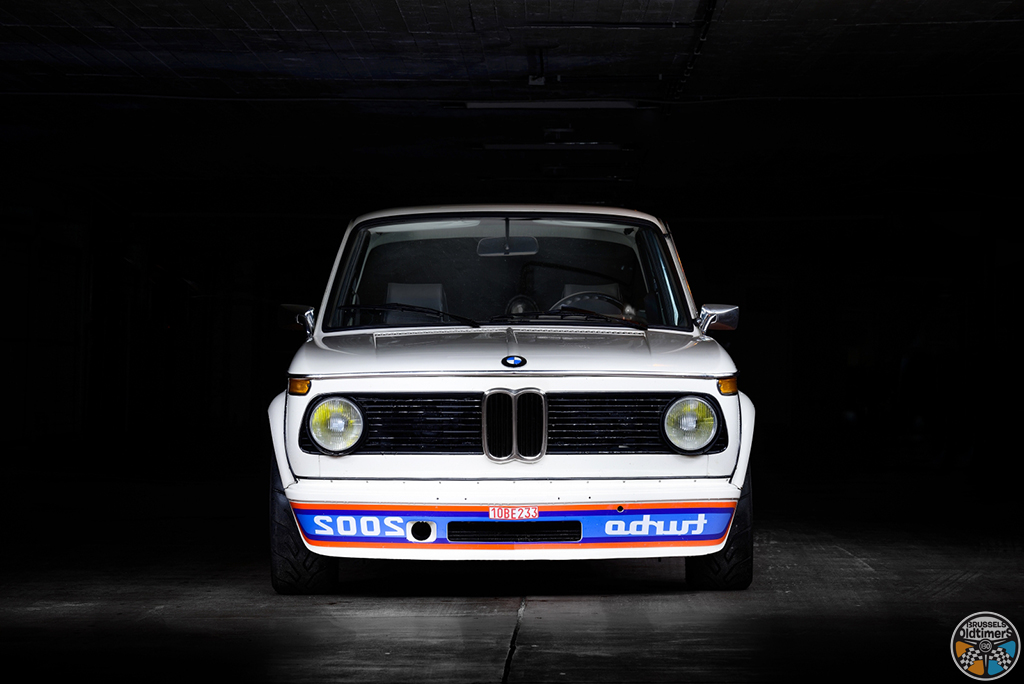 During the 1969 European Touring Car championship, BMW was sensational, bringing along for the first time ever a turbocharged engine. We had to wait another 4 years to be able to buy a turbocharged BMW road car. This was the BMW 2002 Turbo which was the first with this technology, after being joined by the legendary 911 Turbo.

This is when the word turbo went Turbo into the record books.

However the 2002 Turbo wasn’t welcomed as it deserved. Neither the press nor the German officials accepted the fact that it was built to be a  « Provocateur » & « agressive ».

The straw that broke the camel’s back were the « 2002 TURBO » graphics written backwards on the front bumper, to make sure people ahead could read it in their rear view mirror and therefore understand they should move over, a way of saying “Move over, I’m coming through”»

After selling his car, William was looking for a classic. He had a talk with his dad about the possibilities as he was far from sure. His dad explained that he bought his first new car in 1973, a BMW 2002, one of the first “facelift” models with the square rear lights ! His dad had such fond souvenirs that William decided to look for one of these..

Living in France at this time, more precisely in the Savoie, he started searching for a 2002! After many disappointing appointments, he ended up on the website of a guy named Thierry Massot ! A French classic BMW specialist, and more specifically of the 02 series.

Determined to find this model, William drove just under 100km to his garage, unfortunately the day he turned up the garage was closed ! This didn’t stop him from checking out a few 2002s in the carpark, including a superb 2002 Turbo… It was love at first sight ! He fell straight away under the charm of this body built BMW, unfortunately the price was out of his league.

A few weeks later, Thierry Massot contacted William to offer him a test drive of an early 2002ti with 5 speed gearbox and around 150bhp. Although the beauty and the sensations he got from this model, William was still deep in love with the Turbo !

And if Thierry still owned a 2002 Turbo, it was because he wasn’t looking to sell it…
However he had to finish paying for his BMW E21 Gr.3 and after many phonically he gave way and phoned William to say : “I’m getting the car ready, come and pick it up at Christmas ! »

This was the beginning of a long story…

The 2002 was a relatively modern car to drive, but the Turbo is a very sensitive car and very hard to drive when you’re not used to it. Watch out not to set off the turbo through a corner, and even less when the road is wet !

The engine wasn’t the main reason William wanted a 2002 Turbo, it was mainly for it’s tough, manly looks that he chose it.

The sensations at the wheel of the Turbo are impressive, an amazing sense of freedom which lets William relax.
This little beast is still capable of surprising small modern sports cars, especially when the turbo gets going. The performance of this car is extraordinary, especially with the 5 speed sport gearbox (with 1st at the bottom) which allows you to keep the turbo running at all times. The car now has 94 000km on the clock and has never been restored. It’s paint and interior are all original ! The car was originally from France and has always been owned by BMW enthusiasts.

Sold in November 1974, with two optional extras, and not just any extras… The Getrag 235/5 5 speed gearbox with shortened gears and a 3.45:1 limited slip diff ! Of course the car has all the 2002 Turbo specificities, the VDO turbo boost gauge which goes crazy thanks to the right hand pedal, the leather seats, more wrap around than the stock 2002 ones which give no support, the 3 spoke leather wheel and the 3 dials with red accents, etc…! The first owner was a sales manager for BMW France, who then sold it on to the boss of BMW-Alpina Lyon, where the car had it’s first chassis modifications. Since this day the car has many period Alpina parts, like the 7×15” rims, anti roll bars, Bilstein shock absorbers, K-mac adjustable suspension and polyurethane bushings.

The third owner was Thierry Massot, who as written above, added full aviation hoses and a custom built stainless exhaust. He also fully restored the engine and gearbox. William is therefore the fourth owner and has now owned it for 5 years. As soon as he got hold of it, he set about cleaning it thoroughly and restoring the original paint that was in need of some TLC. As the car belonged to a mechanic it was far from clean, hours of polishing were required ! He made the most of his trip to the Essen Techno Classica to buy some of the parts that could do with being replaced.

To increase performance the old Michelin tyres were replaced by Yokohama A048s, which are instantly recognisable as they are semi-slicks. To tighten up the chassis, an anti sway bar has been fitted.

This car turns heads, there’s no doubt about it. It’s agressive look, it’s coloured stripes and especially the writing on the front spoiler. It’s also difficult not to look around when you hear the sound of the stainless exhaust !

Seeing the car, many people recognise it from the well known Belgian film “Dikkenek” but real enthusiasts are rare, the car didn’t have much success because of the oil crisis and the clientele was apprehensive about the reliability of early turbo engines.

But when a real enthusiast sees the car, they’re amazed. Just like when an aged man came and saw William saying that he’d owned one. To start with William thought he was just talking about a basic 2002, until he showed him a specific setting on the specific Recaro seats!