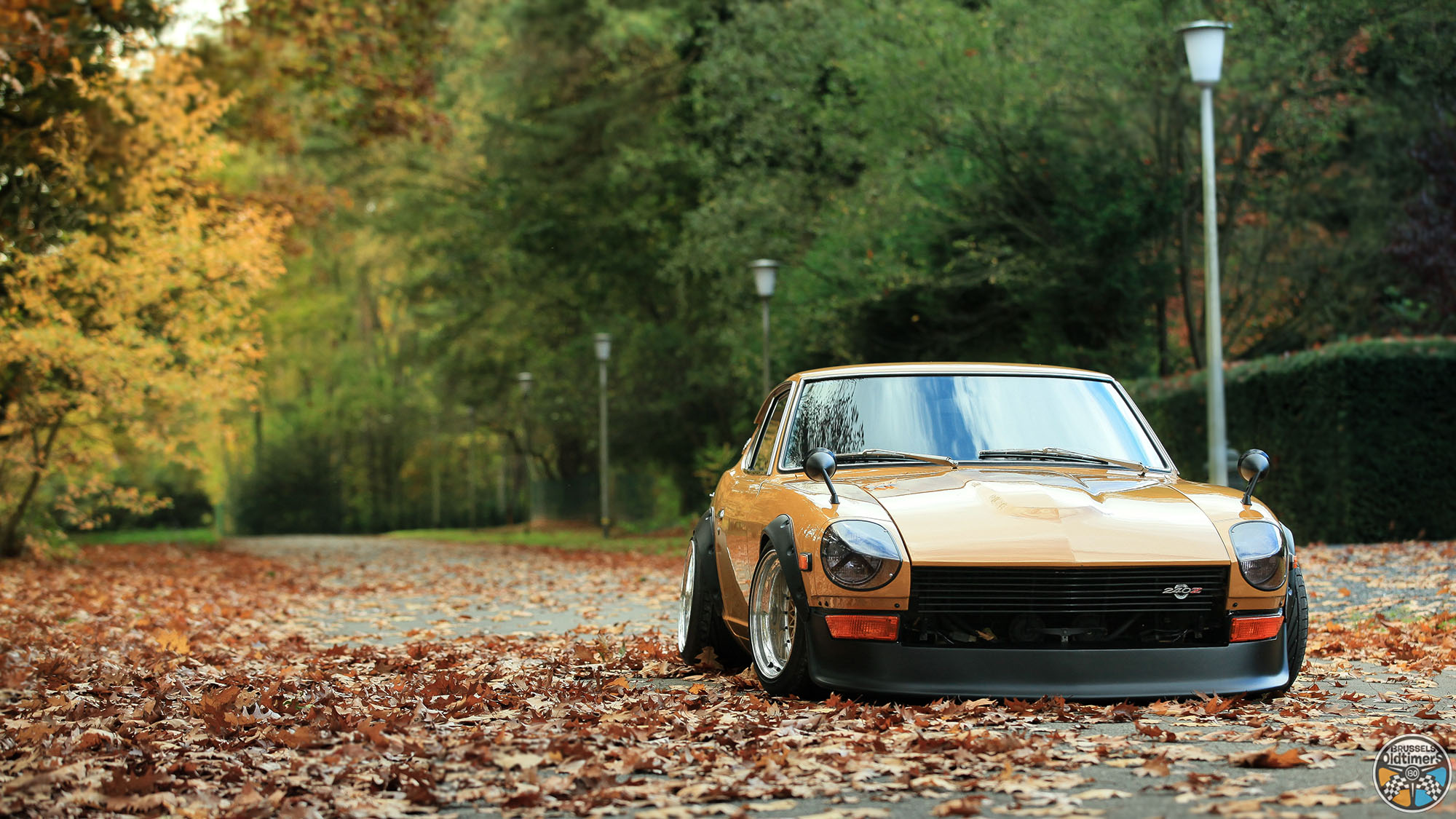 Everybody knows or has already heard of the Fairly Z, otherwise known as the 240Z here in Europe. This sportscar developed by the manufacturer Datsun in Japan from 1969 to 1973. We’d been wanting to spend an afternoon with this beauty for a little while, we had met John at our event about this time last year, at the cinquantenaire at our Winter 130Meet. With a bit of patience, we then contacted him to work out an autumn day with his gold Datsun. Before we had the chance the car had already been featured by the top names in the business : Stanceworks, Tenerife, Autoworks, … No need to say, but this is a really awesome Belgian built car. Why a 1971 Datsun 240Z ? John wanted something rare, in fact very rare with clean lines and also something highly modifiable. It wasn’t an easy task to find this Datsun, originally from Holland. John explained that he went and saw quite a few before finding this one Here’s the story : Once upon a time there was a Datsun for sale on a Dutch website, he contacted the vendor and immediately drove to see the vehicle ( more or less 200km away ). When he arrived it was a disaster, it was a Datsun specialist but the guy had used photos of another Datsun ( same colour ) for the advert to save time, however the car was far from the same condition as the other one. John, disgusted still tried to negotiate the price but with no luck, he went back home and got back to work looking for another Datsun on all the different sites he knew of. He found one just a few kilometres away from the one he’d just looked at, if only he had known! The next day he was back on the road, off to Holland to look out this car, near the town of Gouda ( a coincidence with the colour of the car ) and he finally discovered the perfect base car, originally from Arizona. After purchasing the car and transporting it to Belgium, the first step was to try and get the car running correctly, one of the carburettors was totally jammed and it would only run on 3 of the 6 cylinders. The question of restoring the car haunted John for weeks. He decided to get the car driving perfectly ready for it’s Belgian MOT to be able to drive it a little bit before taking it apart for a few months. And guess what ? A blank MOT with no advisories. John is a mechanic and his brother does bodywork, the perfect combination which makes their garage a real reference when coming to Japanese cars. The work commenced, stripping the car, preparation, metalwork, removing various pieces of trim and bumper mounts, smoothed rear end, tubbed front arches for wide wheels after having test fitted the fender flares, removed the dents from the roof, the doors, welding the floorpans and bottom of the wings but the car was generally very solid. With the Datsun on the hoist, the duo is ready to restore it and starts looking for the numerous parts necessary to make it look like it does today. The list is long : 4 fender flares from Zstores, all new window and door seals, new Datsun Fairly badges, indicators, airdam, fender mirrors, 260z spoiler and the 2 biggest modifications to this car, the air ride and the Compomotive wheels. The project was clearly set out and seemed very easy to John, however is was far from this. Lots of metalwork was done to have a solid car, then a superb paint job done by John’s brother, in it’s original colour. The most work was the air ride suspension, you’ll have noticed that the car is very low, the car is bagged, John doesn’t drive the car at this height. There wasn’t an existing kit for this model, they therefore had to look at alternatives and how to build their own system. the front air ride came from a 2006 BMW 520d and 2 shorter shocks from a 16V Saxo were fitted to get the height right, even those were modified. You’ll have noticed the impressive 15” Compomotive wheels, 3 piece, with wider lips out back than up front, John has the intention to change the fronts to match the back ( 10.5” )… The latest modifications are the smoked plexiglass headlight covers from Zstore, the dashboard has also been redone as it was cracked by the Arizona sun. The next stage will be to redo the engine bay, which wasn’t done at the time of the restoration. He would also like to opt for a more powerful engine, to be continued… John would like to thank his brother for his precious help during the project. He would also like to say about his admiration for his wife’s patience and support.
We would like to thank him for his hospitality, it was a great day, it’s with encounters like this that we remember why we’re so passionate about classic cars. The autumn feel is really there. Thanks & See you soon.