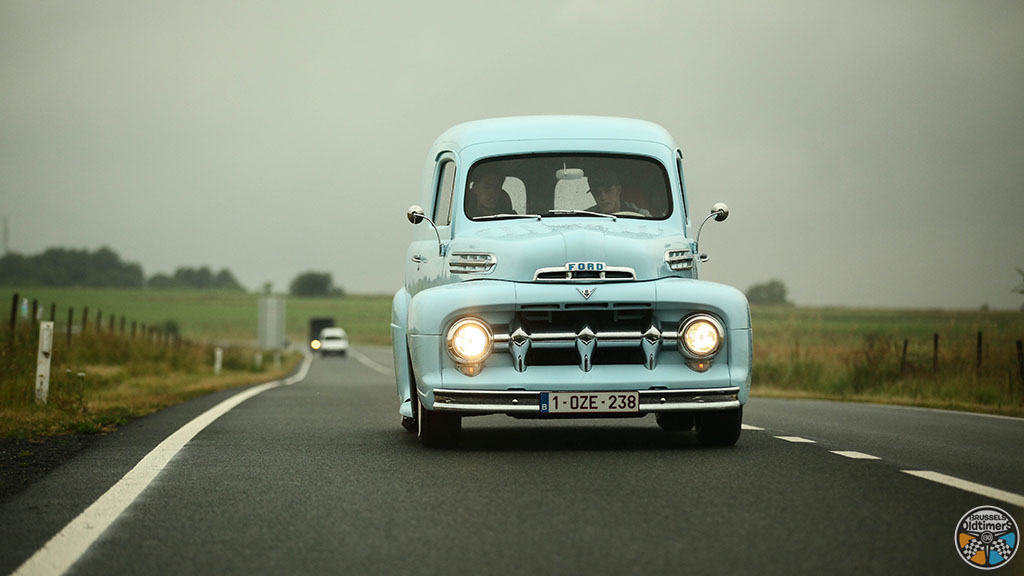 His passion for American vehicles is almost an illness for Maxime since he was born, this was mainly due to his father who took him to the United States as a youngster. He instantly fell in love with America and went ahead and created along with his dad Philippe Vandenhemel and his brother, their own company : www.americangarage.be It’s thanks to word of mouth while on holiday in Florida that they found this gem, they instantly fell in love with this fabulous Ford F1. Firstly because it was a great solid base car for something over 60 years old. Secondly because a 5.7l Corvette engine had been swapped in ! Which is obviously a huge advantage…

Even if after all they fully rebuilt the engine for extra reliability and more power, what a pleasure it is now! The history alone was worth a lot! Sold new in Oahu, Hawaii and it stayed there for around 10 years. In the 60s, it went back to the American continent, more precisely in Kentucky where it was used as a doctors’s vehicle. It’s after the truck was used as an emergency vehicle for many years that an American friend of Maxime found this Ford, he jumped at the opportunity of buying it, then getting it to his place in Florida and started restoring it. Unfortunately, lacking time he had to give up the project. This is the moment when Maxime and his father offered to buy it to complete the restoration. Once the Ford had arrived in their garage in Belgium, they got to work. The bodywork and paint has been redone, in it’s original color just like when it was used as an emergency vehicle. The Corvette power plant was taken apart to be bored out, tuned and fitted with aftermarket camshafts, an Edelbrock 650 CFM carb and a lightweight flywheel. Electronic ignition has also been fitted. Enough to put out a bit more than 400bhp ! Chassis-wise, Ford Mustang 2 drivetrain has been fitted: suspension, front subframe and rear axle ! The truck is now very comfortable and very sporty, you can feel there’s plenty of power and torque under the hood ! As Maxime said, with an American one has the feeling of not being alone to drive the car, this is the kind of car that has a soul and makes us feel emotions difficult to explain.. The interior too has been fully redone, two Silverado seats retired in red were fitted for more comfort, the headliner has been replaced, the carpet too. Dolphins instruments have been installed to complete the whole look.
. This lovely story is far from ending, the car has just been bought by Gérard Depardieu, who had moved to Belgium and was living near Maxime’s garage, he immediately noticed the Ford that was in his showroom. You mustn’t forget, with the fully chromed front end it’s far from discreet ! Gérard stopped and went into the garage to say that he wanted the car ! The Ford is still in Belgium for the moment, but it could be cruising around Paris within the next few months !