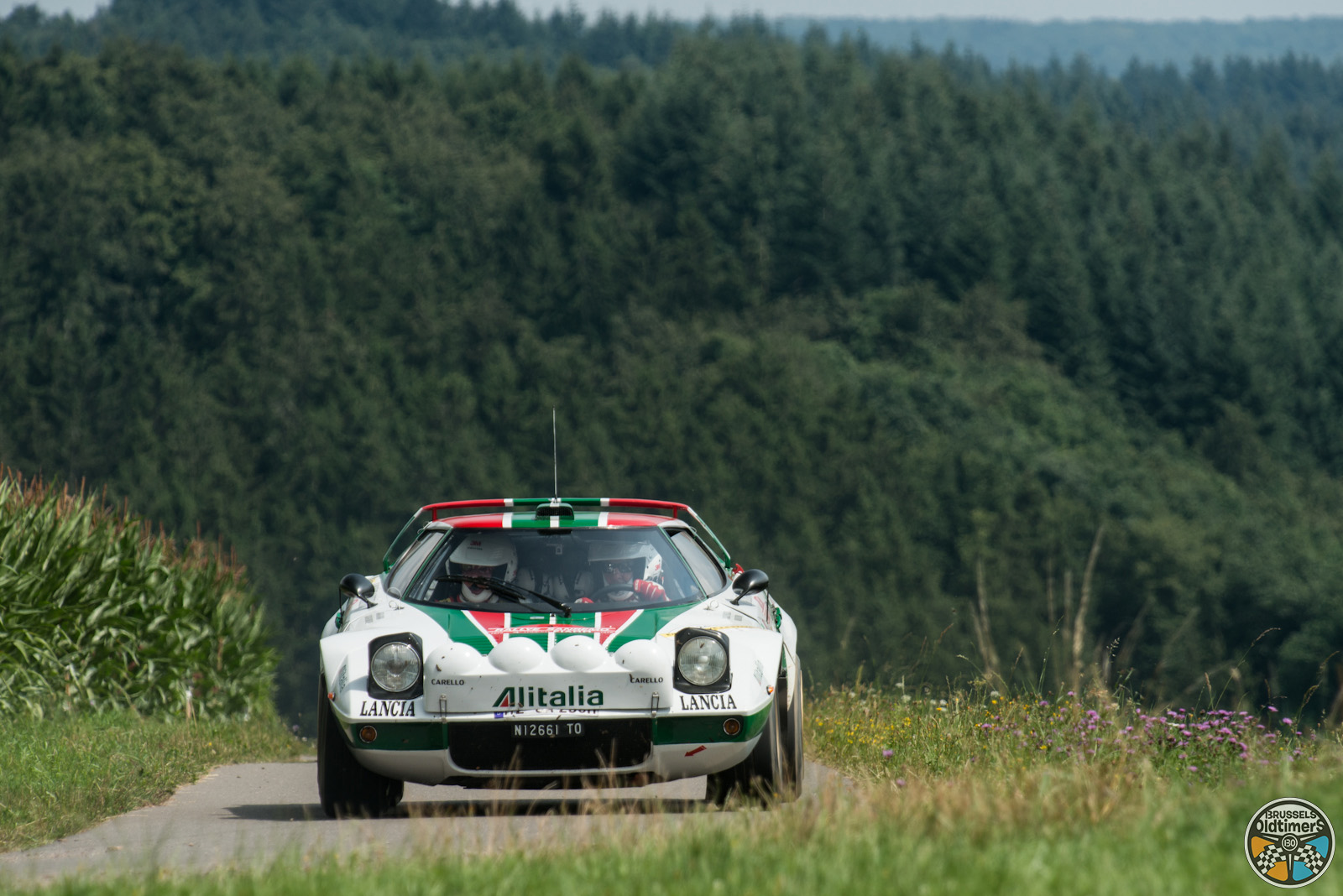 Stratos, 037, Delta… All names that intrigue any enthusiasts! We were lucky enough to go to l’Eifel Rallye Festival, an event that welcomes rally legends, with Group B cars being the stars of the show!
Off to Eifel, a magnificent region of Germany that is best known for the famous Nurburgring track, to try and live a part of Lancia’s world rally championship history! Scuderia Lancia, that later became Squadra Corse HF Lancia is the manufacturer’s racing division workshop, launched in 1952 by Gianni Lancia, the founder’s son.
They officially made their debut in motorsport and showed off what they were capable of at the Carrera Panamericana and Targa Florio and even Mille Miglia. The team even had a go at Formula 1 in 1954-1955, without any particular success. The Squadra Corse managed to make their mark in the Endurance world championship, with 3 world titles between 1979 and 1981. However today we’re going to look closer at their rally history, where Lancia won 11 constructor titles and 4 driver titles between 1974 and 1992. Since late 1991 and the end of the Delta, the company pulled out of motorsport. The original design of this car, rather odd, is down to Nuccio Bertone’s talented hand : a pure sharp body, compact and wide. The Lancia Stratos concept car was released in 1970, at the Turin motorshow, it was powered by a V4 Lancia Fulvia power plant.
The final production car was very different from the original concept, both on the aesthetics side and the bigger glass cockpit and also the engine, a transverse mounted 2418cc 190 bhp V6 from the Ferrari Dino.
The Stratos was the first ever car to be designed for international rallying, which helped it to win against it’s rivals, which back in the day were stock road cars adapted for rally use. Lancia made many test versions of the Statos, taking part in many rally in 1972 and 1973 in the Group 5 class. From 1973 401 road going Stratos were built, a requirement for the 1974 world championship. The race car was highly tuned to 280bhp, then 480bhp with a turbo-supercharged version. Unfortunately the most powerful version, only allowed in Group 5 wasn’t as reliable as it’s rivals which were naturally aspirated.
The car’s natural potential, which is compact and light with good balance thanks to it’s mid mounted transverse engine meant that it went on to win the championship in 1974, 1975 and 1976 with the Italian, Sandro Munari behind the wheel. It could have won other races, if it wasn’t replaced by the Fiat 131 Abarth for trade policy reasons. Even without Fiat’s support, with the various rule changes for the rally, the Stratos was still a very competitive car with private teams : it’s last victory was in 1981, in the Rallye du tour de Corse, driven by Bernard Darniche. Being a direct descendant of the Montecarlo Gr5 world championship in 1979, 1980 and 1981, the Lancia Rally project 037 (also called Rally or Rally 037) is revealed in october 1981. This version was a prototype aimed for FIA Groupe B World Rally Championship approval of the Lancia 037. The GrB is quite loosely restricted, and suits Lancia’s concept perfectly. The category allows four wheel drive, use of technological materials, kevlar, plastic and allows major evolutions throughout the year. Also, only 200 roadgoing cars are necessary for rally homologation, and only 20 extra per evolution.
Cesare Fiorio chose a rear wheel drive two seater and set out to make it as light as possible and easy to work on. He went against Audi’s idea, who, with the quattro, chose four wheel drive and built road cars with the same technology, whereas the Lancia 037 was built as a racing car from the start. Fiori built two hundred 037 stradale for homologation reasons, which were totally different to the Montecarlo road car. The engine was still a double camshaft 4 cylinder, the same as in the Fiat 131 Abarth, it was fitted perpendicularly to make working on it easier. It was fitted with a supercharger and put out 265bhp to start with, running a twin choke Weber carb. This supercharger, although creating less power than a turbo, it offered a more linear power band, with no lag and the tests against the turbocharged Beta Montecarlo Gr5 proved this. 1995cc, but equivalent of a 2793 with the modifications. Designed by Pininfarina, the 037 is very low and has many aerodynamic features, like a big wing and two bulges in the roof for crash helmets. No compromises were made when it came to the design, unlike Audi, Lancia wasn’t aiming to make it look like their road cars, as their aim is to make it as good as possible. The cockpit is an aluminium monocoque with 2 fake tubular chassis that support the suspension and engine/gearbox. The body is made of polyester and fully removable for mechanics to work on it. In the end the 037 made 320bhp for 800kilos. The 037 started it’s career in april 1982 in the European championship in Sardinia. It’s first international race was only a few years later in Corsica where Markku Alén finished 9th. Attilio Bettega had a bad accident which ended up in kevlar doors being fitted.
From the RAC, the Lancias showed their full potential against the Audi quattro, Alén finished 4th overall and first in group B.
The car is now reliable for the official start of Group B in 1983. Walter Röhrl and Markku Alén finished first and second and Lancia finished 1st, 2nd and 3rd (semi privately owned car) in Corsica. At the Rallye de l’Acropole, again the 037 finished first and second, even on a stage more suited to 4WD cars. Audi gained more and more points over the season, but only 8 best results out of 12 counted, Lancia won the World Rally Championship 2 points ahead of Audi thanks to it’s results in San Remo. This was the last time a 2WD car won the WRC. In 1984, Lancia raced the 037 Evolution in Monte-Carlo, where the displacement had been increased to 2111cc, staying under the theoretical N/A 3 litre limit. But with the arrival of the Peugeot 205 Turbo 16, Lancia knows that 4WD is the way forward and Giorgio Pianta, technical director of the racing division started the first tests for the 1985 season. In Monte-Carlo 1984, in the snow, Lancia-Martini couldn’t do any better than 5th, 6th and 8th place. The 037s are dominated by the Audi quattro, and even after finishing 1st and 2nd in Corsica and gave up their world title to Audi. Cesare Fiorio sped up the development of the Lancia Delta HF Intégrale and the Delta S4 is released in December. The Delta is ready late 1985, Lancia had to do most of the World Championship with the 037 which was left in the dust by the quattro sport and Peugeot 205 Turbo 16 évolution 2. The Tour de Corse was a dramatic event for the Italian team, where Attilio Bettega was killed after hitting a tree on the Zérubia special. Peugeot won 7 of 11 rallies thanks to Ari Vatanen, Timo Salonen and Bruno Saby. Even Audi couldn’t keep up with the French team, Lancia only won at San Remo. Late 80s, Group S was set to replace Group B, the FIA wanted to encourage innovative design by reducing the number of road going versions of the rally cars to 10 instead of 200. However with Bettega and Toivonen’s accidents the FIA went looking for more secure ways to race and cancelled Group S. Group A, created in 1982 was considered as the second division of rallying until now. In 1987 it became the main category and made problems with the manufacturers who had to make 5000 road going versions of their racing car. Lancia was dependant on it’s exclusive high performance car, the Delta HF 4WD to get back in the running. 2300 cars had already been built so a series of 2700 was enough for homologation. The Lancia Delta Group A replaced the Delta S4 Group B when it was released in 1987, it was an immediate winner in WRC!
You all know the rest of the story, it was a huge success and won the constructors title six times in a row from 1987 to 1992! An unbeaten record even today. The car helped Juha Kankkunen to be the champion in 1987 and 1991, and Miki Basin in 1988 and 1989! Without a sucessor for the Delta, Lancia decided to retire from WRC in late 1991. The Italians therefore launched a last version that was driven by the semi-private Jolly Club Team. The maximum potential of an already ten year old car was extracted and in 1992 the Delta allowed Lancia to win a last constructors championship in WRC.