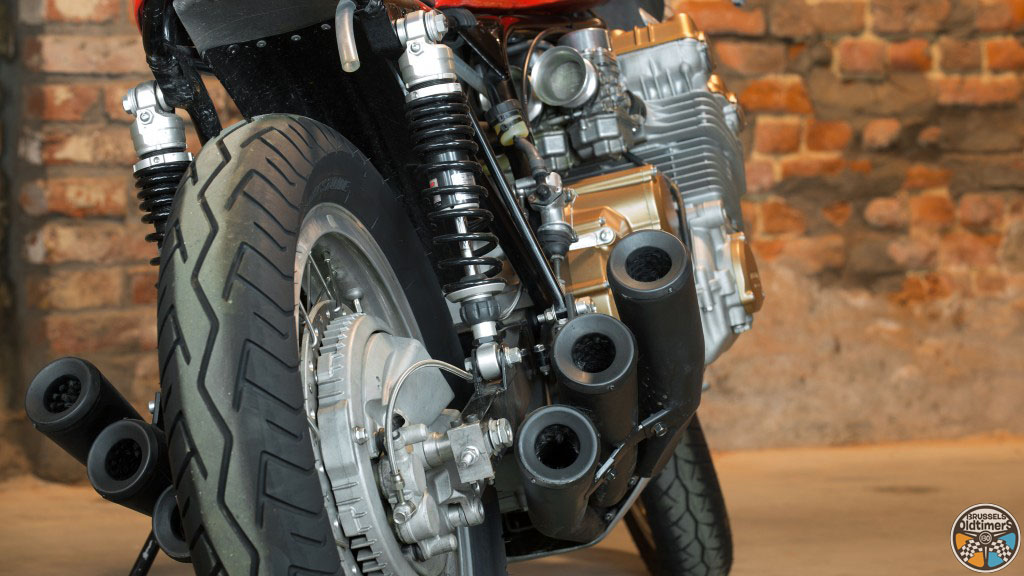 Have you heard of Soichiro Irimajiri ? ?

Infact, yes, you do. This superb engineer is the creator (amongst others) of Mike Hailwood’s Honda RC 166, and it’s big sister, the 1000 CBX, released in the spring of 78, only 35 years ago ! Two sacred monsters which both dominated the market of the era in terms of sophistication and power ! Two milestones in motorcycle history and Honda’s own heritage.

Starting in 1959, Honda were the first to use racing (followed by Yamaha then Suzuki and finally Kawasaki) to show off the Japanese technological prowess. With 4 stroke multiple cylindres, the manufacturer won, one by one every single world titles (making a record in 1966: Every title won in the same year !). This technology revolved around an incredible knowledge of materials, and especially, a common line: Fractionation. This allows higher revs ( approaching 18 000rpm ) which would create a fantastic soundtrack for the spectators.

Seeing as the Italians had been building 350 and 500cc 4 cylinder racing engines since the 50s, Honda will learn and go much further ! An equal displacement and technical development, a twin cylinder will always be more powerful than a single (with a rough coefficient of 1.4), a 3 cylinder would beat a twin etc…. The peak of this reasoning is reached with a 5 cylinder 125cc, and especially the 250 and 350cc 6 cylinders !

Realising the only way to keep up with the ever increasing power of rival 2 strokes, Honda understood that engine speed was the key to power.

The Honda 6 is the ultimate machine of performance and sophistication, especially driven by Mike Hailwood. It is the icon of the GPs of the 60s, quick, victorious, with a unique tune, it is the ideal racing bike.

The bike we have here, a machine of a child’s dreams, inspired by Mike Hailwood’s famous 250cc however based on a Cbx1000, enough to bring together the owners two fantasies. There is an obvious difference in size with the 250cc, and even before getting close, the engine stands out. It is the main feature, it’s enough on it’s own, the chassis is just there to hold it in place, the wheels to get it along the road. This bike is an engine !